Ely Buendia and the Spiders from Mars 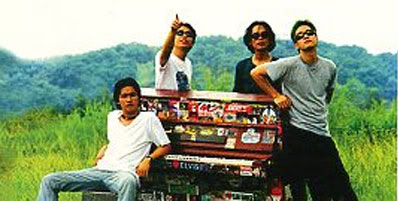 If you don’t get the word play on the title, I suggest you Google vintage David Bowie. And yes, the reference will be off since Ely did not play it left hand.

Anyway, I first heard about the Eraserhead’s reunion concert from Risha. At first I was a bit skeptical about it since I always thought that Raymund Marasigan will forever have a grudge on Ely. Well, after reading about it over at Philmusic, I admit I was a bit shocked. I never expected it coming. And I guess so did everyone else. And it has caused a lot of buzz.

No doubt the Eheads were a musical influence to any person from my generation. I have to admit that it was because of them that ‘”Tang ina” became part of my idiolect. I had cassette tapes of their first four albums and remember fighting tooth and nail for a copy of Cutterpillow.

I’ve only seen them in concert just once. They rocked. After which, I wasn’t able to see them on stage as the Eheads anymore. Sure I used to regularly catch Cambio via Admit One shows but it was different. I wouldn’t say that Ely made the difference but the four together surely was an amalgamation that was unique.

Will I be that die-hard fan again this time around? I think I’m not though there’s a small part of me who thinks that watching them again perform would be a treat.

It’s a good thing it’ll be a one-night thing. In today’s world, the kids will kill the man. Whoever “the man” is.

Whoever had the idea to put out that “tribute” album committed blasphemy.

Adam David has a book out entitled “The El Bimbo Variations” – a collection of . Such linguistic versatility showcasing wit and literacy. Check it out here. I still don’t have a copy but after reading Carl‘s copy, I surely want one. And yes, quite fitting for an Eheads comeback too.

I regret it that my sister’s autographed poster of them got lost over time. I bet that would fetch a good sum over at eBay (and so did 2 jackets of my Michael Jordan basketball cards that our mother threw away).