I paid Michael Bay to piss me off 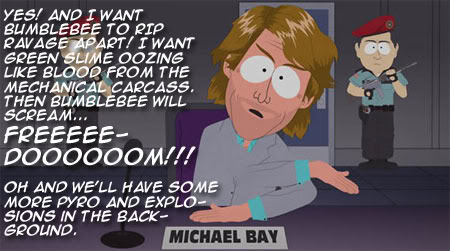 Sorry, friends who think that Transformers 2: Revenge of the Fallen is the movie event of the year. Or if you’ve watched it and are raving about how mad the whole movie was. I can’t say I share your sentiments. I do understand why you’re all raving about it. I really do.

Watched the movie with the Dearest earlier today and as the day draws to an end, I think that it was nothing but a cost write-off amounting to Php 270 and two and a half hours of my precious time. Even the appearance of a scantily-clad Megan Fox spooning a big bike wasn’t enough to redeem the movie for me.

And Michael Bay is all to blame. Too bad I just made him richer with my ticket. Sure you don’t watch Transformers for the story. Much like any other Michael Bay film (Armageddon, The Rock, Bad Boys 1 and 2, Pearl Harbor and the first Transformers), the story’s bound to go wrong somewhere.

Sure I liked Armageddon, The Rock, and Bad Boys all because of certain things that redeemed them for me – animal crackers, Sean Connery, and Joe Pantoliano, respectively. Otherwise, his movies are just a stream of car crashes, bombs going off, and other things going kaboom. I’m trying to remember how many city blocks got blown to hell in the Godfather movies and that worked.

Michael Bay is an explosion junkie. I seriously think that he needs to be check by a psychiatrist. Who knows? He might share the profile of those people who just love to watch the world burn.

I think the only reasons Pearl Harbor ran for an three hours are to tease the audience for a possible devil’s three-way involving Kate Beckinsale, Ben Affleck, and Josh Hartnet’s characters, maximize Alec Baldwin’s talent fee, and to have even more stuff crashing and blowing up.

The same goes for Transformers 2. Only this time, Michael Bay went totally berserk with his visual effects. The fast-paced action, explosions, and wild camera work almost triggered an epileptic episode. Transformers 2, my friends is nothing but a combination of elements from his other movies and rip-offs of Mel Gibson, Ridley Scott, and Steven Spielberg (and yes, Spielberg co-produced the damn thing).

Think Transformers with the crashing cars of Bad Boys 2, outer space shots of Armageddon, flying airplanes of Pearl Harbor, flares of The Rock, the archeological settings of Indiana Jones, and the hacked-off-body- parts (albeit mechanical) savagery of Braveheart and Gladiator.

The movie could’ve done without Bay’s overactive (and overrated) imagination. What’s up with Prime dying all over again? I motherf*ckin’ cried when the good ol’ Prime of the cartoons died in the movie. Trying to pull it off for this generation is a slight to our generation. Having Prime ultimately don additional body armor and tear all of the Decepticons apart was just overkill.

Yup. Michael Bay is nothing but a five year old gifted not with crayons to draw his pictures of red sports cars with flame decals and a rocket launcher on the hood but with a summer movie’s budget and a film army.

Anyway, I have to admit that I nitpicked his movie. If only I had watched it during a “I am such a child” moment, then maybe I would’ve loved it. No little boy would get pissed off with giant robots with rockets and lasers. Only some bitter old bastard like me.

Yup. It seems like I’ve lost my inner child.

Oh and though I don’t want to overread his movie, I somehow appreciate the idea of “No matter how advanced Cybertronians are, they are still as savage and primal as humans.” Did Bay even think of that while filming? Or am I throwing him a metaphorical bone here?