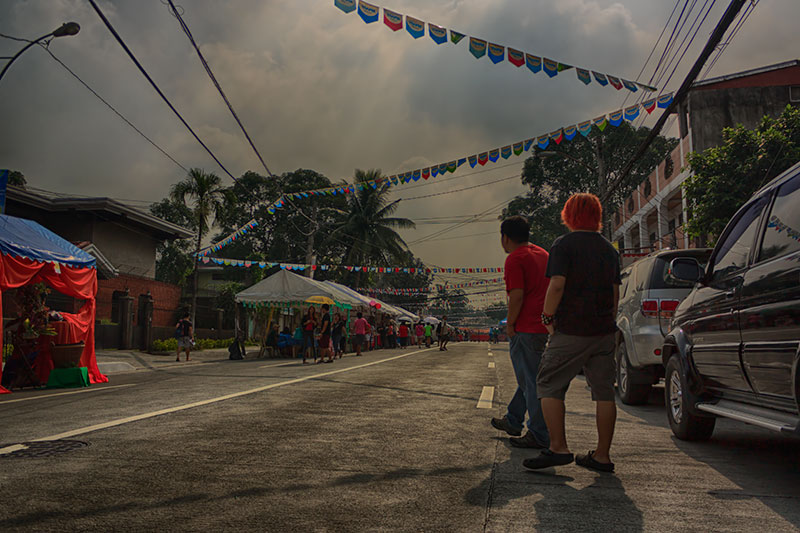 Food trips are quintessential to any barkada. Communal gluttony is probably one of the key reasons humans were driven towards the concept of tribes. Even after 10 years out of college, food trips still draw our little band of misfits together. When word got out about the Quezon City Food Fest along Maginhawa, we knew it was time for us to get together.

Too bad our kaing mama (bigkasin nang maragsa ang “mama”) days of sisig and lechon have given way to more “conscientious” food pickings, no thanks to signs of aging. We used to gorge on cholesterol-laden platters accompanied by heaps of rice at Mang Jimmy’s back in college. Now, we hesitate ordering extra rice lest our growing paunches creep another inch. Still, food is food and food with friends is always a welcome opportunity.

We looked forward to it since we know of plenty of places to find good food in the area though I had my reservations knowing how large a crowd a food fest can draw. Personally, I’m the type of guy who would go to malls early morning as they opened to avoid the throng. I hate disorganized crowds. Maginhawa was to be closed starting Friday so we opted to just spend the night at Jojo’s place since it was a few blocks from Maginhawa itself. I left my ride at the office at V. Luna since road closure meant heavy traffic. 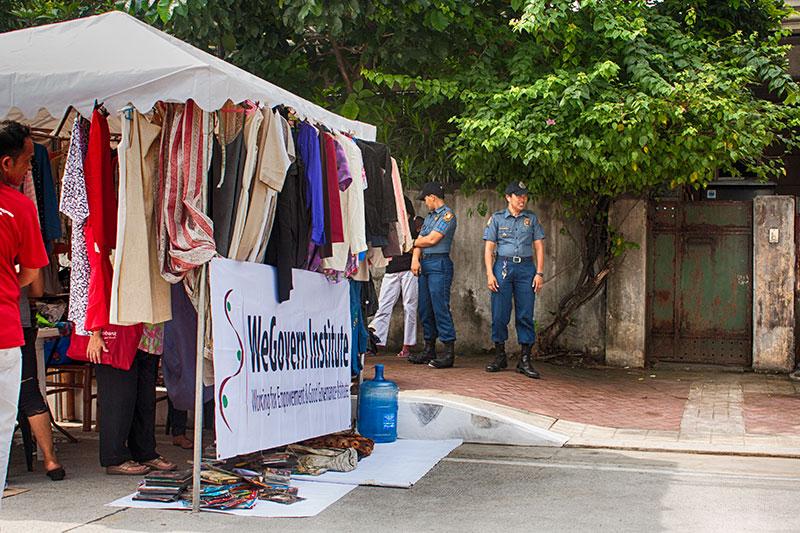 You could just wish that those aren’t pirated DVDs in front of the police.

Our initial walk to get breakfast proved fruitless so we decided to go for the permanent establishments in the area. We ended up walking towards Malingap and getting our breakfast on at Pi Breakfast and Pies. Man is a creature of habit, I guess.

Heading back for a second pass after a good hour and a half, it wasn’t even any better. Still no signs of cooked food. The road, which was supposed to be closed, was still being used by residents but mostly government vehicles (red plates) ferrying VIPs cut their way through the crowd literally inches away from running over someone’s unlucky feet. There were select bustles of activity but only because the politicos were having their token appearances and their cadre of “volunteers” followed them like they were Jesus (Jesi? Jesuses? What’s the plural?) feeding the five thousand.

Having had our fill from brunch, nothing really drew our attention save for the real estate booths and stalls with food-unrelated goods. We mostly had to keep our eyes on the road for the stray dog shit littering the streets. There were lechon and burger stands but Cebu lechon and Snack Shack have already set bars on the best buck-per-bang for those meals. And those, I personally could reserve to feast on other days.

And perhaps that’s the one thing that hindered me from appreciating the event at all – my proximity to Maginhawa. I basically worked in the area for a very good part of my professional career. My work moved me from Matalino to V. Luna to Diliman to working out of Mahabagin and then back to V. Luna. Maginhawa and its peripheries were basically a walk or a trike ride away. Maginhawa as a foodie destination isn’t a novelty to me.

By noon, we were convinced of how underwhelming the event was and headed back to Jojo’s place. Mike and I had other things to do so we decided to call it quits for the day. We were only thankful not to have experienced the bigger crush of people in the afternoon which our other friends (un)happily reported via social media. Stalls apparently ran out of food. No places were available to sit down and eat. Traffic was horrible.

If I were the one to organize it, I would make it a different event. Instead of just parading through a two-kilometer stretch of road hoping to spot a stall from which to buy food, I’d simply require exhibitors to offer bite-size samplers of their best sellers for free to all making the exhibit a walk-through food buffet. I’m sure the QC government could have subsidized that in the form of incentives like tax breaks for participating establishments.

But no. The government has overpromised and underdelivered. Many went home tired, hungry, and angry. Again. Like always.