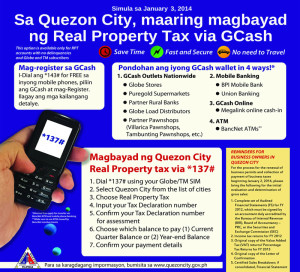 New year. Back in the grind. Coffers ran dry by the holiday splurges. And here is the government, reminding you of your civic duty. Business and occupational permits need to be renewed. And taxes have to be paid.

I loathe transacting with the government. I hate the long queues, inefficient processes, and the bitchy government staff. I hate spending my money knowing that it might fund some retard politician’s luxuries. But it’s January and real property taxes are again due. Time to do my civic duty.

We still maintain property in Quezon City so I usually make the trip to QC Hall and go through the process. This has gotten simpler and quicker over the years but it would still take aways a couple of hours of your life. The good thing about QC’s treasury office is that they’re usually open during weekends and holidays during January to accommodate taxpayers. However, due to current circumstances, I just don’t have enough time to drop by and pay even on holidays.

So it was quite fortunate that QC has launched a way to pay real property taxes via Globe GCash. No need to physically to the city hall anymore. Being a fan of being able to do things remotely, I wanted to give it a shot. Here’s basically the process from their website.

From my experience, I did hit a couple of snags. First was that that when I first tried the system, I got errors of “invalid tax declaration number.” I was prompted to call a hotline. I did early in the morning to confirm and the lady (from the city treasurer’s office) answered. She acknowledged that this was possible because they still have yet to upload all the data to Globe’s system. She just asked for my contact details and promised me. Later that afternoon, she called back and informed me to try again and to call her back if I had any future problems with the system. The system worked. Pleasant interactions with government workers are rare for me so she has my thumbs up.

The second snag was my Globe GCash wasn’t funded so I had to fund it. I tried doing it via online banking with BDO care of Dragonpay but BDO’s approval system takes a while. (It can also be done through Unionbank, BPI and UCPB online banking but I didn’t have accounts in those banks.) Coincidentally, I had to pick the wife up from work and there was a Globe business center in her CBD so I was able to have my GCash funded even if it was already 8 PM.

Anyway, I tried the system after having loaded my GCash wallet. The process was straightforward. I simply followed the USSD code menus on my phone. I then received confirmation text messages of my payment including transaction reference that can be entered to another webpage for me to print the official receipt. I did so upon getting home and now the ORs are filed neatly in the tax payment records of our property.

If you are paying property taxes for your home, you might want to keep in mind that the land and the building (the house) are two different properties so you might have to be paying for two tax declaration numbers.

I would say I was pleasantly surprised that what could’ve been a tedious chore that usually stresses me out got resolved with relative ease and not much fussing about in my end. Had my GCash been funded, the whole process could just have taken me literally a couple of minutes.

These times, you can just say, “Kaya naman pala eh,” and wonder why can’t these conveniences of automation and computing be made available to a wider set of social services.